Post-Mortem : "An everlasting nightmare with pico8" 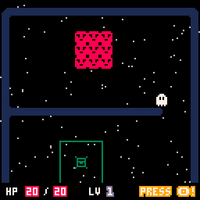 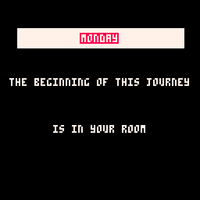 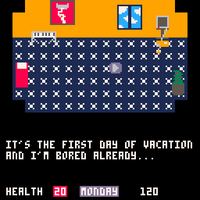 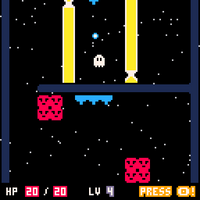 I didn't do a devlog, not because busy, but I was very shy and it takes time for me to find the right word.

I will keep this short, because I already forget most of the work I did. (Warning, lots of English errors, I'm French and I'm tired)

First of all, thank you! My game is in the top 5 for every criterias! This is a great surprise, wow!

(This heading is too f*cking big)

I like this title screen. It is first "real" title screen I made and it works! I wanted a pretty background, so I imagined those colorful lines going up, to follow the movement of the screen during the dreams.

The gameplay is... really fun? And it mix good with the story??? Obviously, this structure is very inspired by Atlus's Catherine, a game I didn't have the chance to play yet (PS4 remaster when), but I love the persona serie (with the other Shin Megami Tensei series), and I like how the story and the gameplay are linked together, it's very smart! I have several ideas like with this structure, this is really a big inspiration!

WHAT WENT... NOT SO WELL

Saturday, I finished the game the night before I moved on for my studies. I already exported previous builds to test them, but when I wanted to export the final build... Boom, error!

You see, pico-8 has limitations one the programs, because it must fit in a .png picture. There is a token count at the bottom of the screen, but there is also something else, that was not showing... A characters limitation!

I nearly gave up. None of the minifier worked. But I wanted to publish this game, which is one of the few recent thing that I'm pround of. So I deleted every useless characters I could. And... it work! Phew... That was close!

I wanted to have a looooot of obstacles for the game, but, like I said in the comments:

I always want to throw new stuff at the player nonstop, but it would  reduce the potential of existing obstacles...

I wanted to have a lot of enemies to compensate but lack of time + tokens limit in pico 8 = nope, too bad!

As a result, I find the difficulty not very balanced between the levels, which can cause frustrations to some players even if the game is short, a pretty bad thing for someone who wants to make his games for everyone...

I try to compose a original soundtrack for each of my project. I don't really using songs that aren't made for it. Music is the first thing I begin in this project... And the last thing I finished. The only way to make music in Pico-8 is with the tracker, a tool I am not really used to... This tracker is less practical than the windows ones and some keys used to input notes are also hotkeys, it was a nightmare!

So I was not really happy with the result, and also in the HTML version of the game, the sound effects (in addition of having a worse quality) sometimes cut a music instrument.

WHAT CAN I DO WITH THIS NOW?

-A HD version (with the "LÖVE" framework maybe)

An everlasting dream with you

Escape from the spectrum whithin your dreams. A Pico-8 game.